The June meeting started 5 minutes early in a very warm room. We received apologies from Young Chris, Noel, Lisa and Steve. It was mentioned that Elsie was probably on her way but the Chairman took no notice and started the meeting anyway.

The minutes were proposed and seconded and it was at this time that Elsie arrived. Which was embarrassing for the Chairman. Elsie announced that she needed the toilet and the meeting paused, no timing of the loo break was taken. During this time Chairman Andrew got angry with his father for something I missed and said he was considering fining his father for “being a muttering disgruntled old farmer”.

In correspondence we heard from Ings Parish Council who have raised half the money needed to rebuild a playground there. Whilst all members know where Ings is no one is quite sure where the playground is. It was resolved that Maggie should be sent to cause trouble and to seek out more information as we look to support the cause.

St Marys Hospice wrote to see if we should enter their draw. The top prize is £250 and it was suggested that we buy a book as we usually do. Andrew said if we won we would probably just give them the £250 back, Peter suggested that if we won we should give it to St Johns Hospice. I honestly think if we win we should go out for Pizza, but giving it away might be more honourable.

I am not sure if it is the thought of Pizza but I have begun to get very hot. Other

Last month we heard from Sight Advice South Lakeland and the club wished to support them in their work. We had thought that we should raise money for them with the Jingle Bell Jog BUT the club are now thinking we should give them more from other funds and to do other fund raising with the Jingle Bell Jog. However, the club need to speak to the Kendal club prior to going forward with a large donation considering that their site is in Kendal.

Our Miss Money Penny told us that we raised £253 from Chipatti in the Park at Brathay, £20 from the penny harvest at Andrew Fell’s shop, £650 sponsorship for the car show, £270 from entries to the car show, £153.50 from “Whatsfield” junior foot ball team (I am 96.2% sure I have spelt that wrong), £262 from the Bouncy Castle attending the Cardboard Boat Race and £459.50 from the Bouncy at the Brathay marathon.

Outgoings we had for the coach(not the training coach but a coach with wheels) for the little footballers some petrol, post stamps, some marquee money, some money to Chipatti in the park, buying draw tickets and banners for the car show, some money to Rosemere Cancer Charity and some money to a sponsor of the car show as they accidently paid us twice.

£100 was very kindly donated to the club by Chris and Alison Whitelegg who had stayed at Smallwood Guesthouse.

Last month we agreed to purchase a few trees for the Queen’s birthday. One has been purchased at the top of Birthwaite road, it is an Apple Tree. No one is sure who has paid for it yet.

The club agreed to have a coffee morning on the 10th December raising funds for something.

The bouncy castle went for testing. Testing the bouncy castle is a key part of our safety policy. For reasons unknown it needs picking up at 7pm on Friday evening. The club think that is a very silly time to be playing with Bouncy Castles.

Lions equipment will be going to Langdale Gala and Ambleside Sports.

The Lakes Classic Vehicle show is doing very well. Lots of good sponsorship coming in and thanks were given to Laura, Chris, Thea and Steve for their works so far. Over 200 vehicles have booked which is up at the same stage from last year which is a great sign. Entertainment will include the Cockermouth Ukulele band, “Identify the Part” an interesting game, bottle tombola, a fantastic raffle, Firemen (who are more than willing to cut up a car, ie recover a person, if we can find one), Mountain Rescue, Scalextric track and Lego. That is real life lego! At a car show! If the cars don’t sell you on it surely the Lego will! I am very very excited now.

Elsie has taken her shoes off. I am pretty sure it is because of the heat, but it might be because it is more comfortable. So I thought I should take a picture to show you, but isn’t that weird? I don’t think you are allowed to take photos of womens feet in public. Equally it would be very strange of me to ask Elsie if I can take a photo of her feet. I have a dilemma here… I also dont want to Google to check if it is acceptable or not. Also if my beautiful and wonderful girlfriend checked my phone and found I had taken a photo of someone elses feet then that would not end well for me, especially if my girlfriend then thought I liked feet. I don’t mind feet but im not into them. Ok, I have figured out how to do this without it being weird. If I take a photo of the whole of Elsie, which includes her feet then that isnt weird is it? Here we go Elsie with no shoes on and Ronnie who is none the wiser to his next door neighbours’ feet: 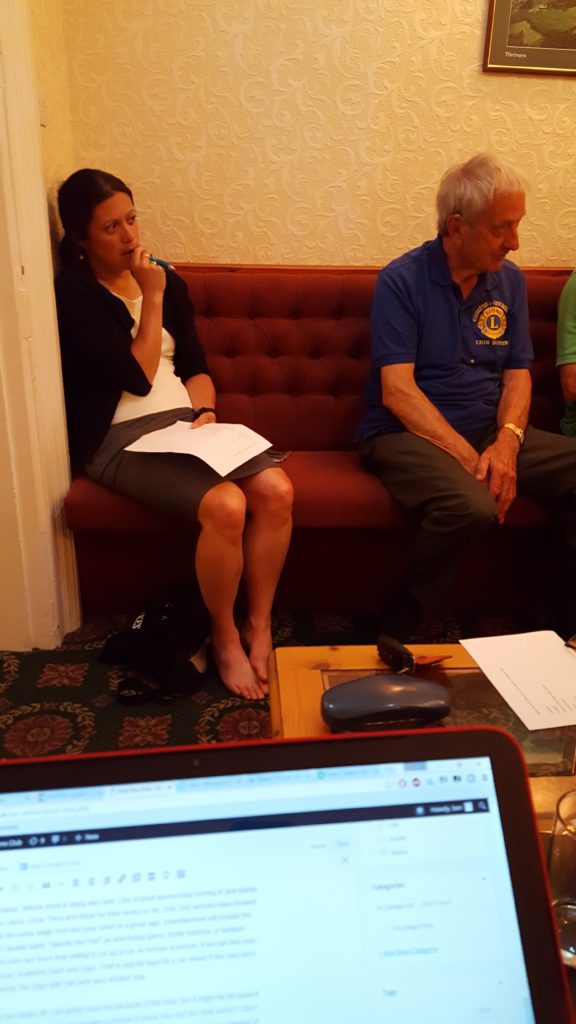 After that we are now discussing our Summer Festival which will now include a soft toy tombola and possibly a tug of war.

In Twinning Lion Old Chris told us about what he did on his Holidays. He gave an excellent account of the great time he had in Limoux including swanky dinners, blanquette and nuptials reported in the local press there. I will put together a separate report on his holiday to give the trip its full due. Our twinning will become official in May next year (2017). Lion Old Chris is going to organise a trip for our club to go over to Limoux in mid May next year. Lion Phil said he was going to drive.

Lion Chris brought a bottle of Limoux blanquette back for us to enjoy. Chris also brought some of his finest Essex Crystal glassware. 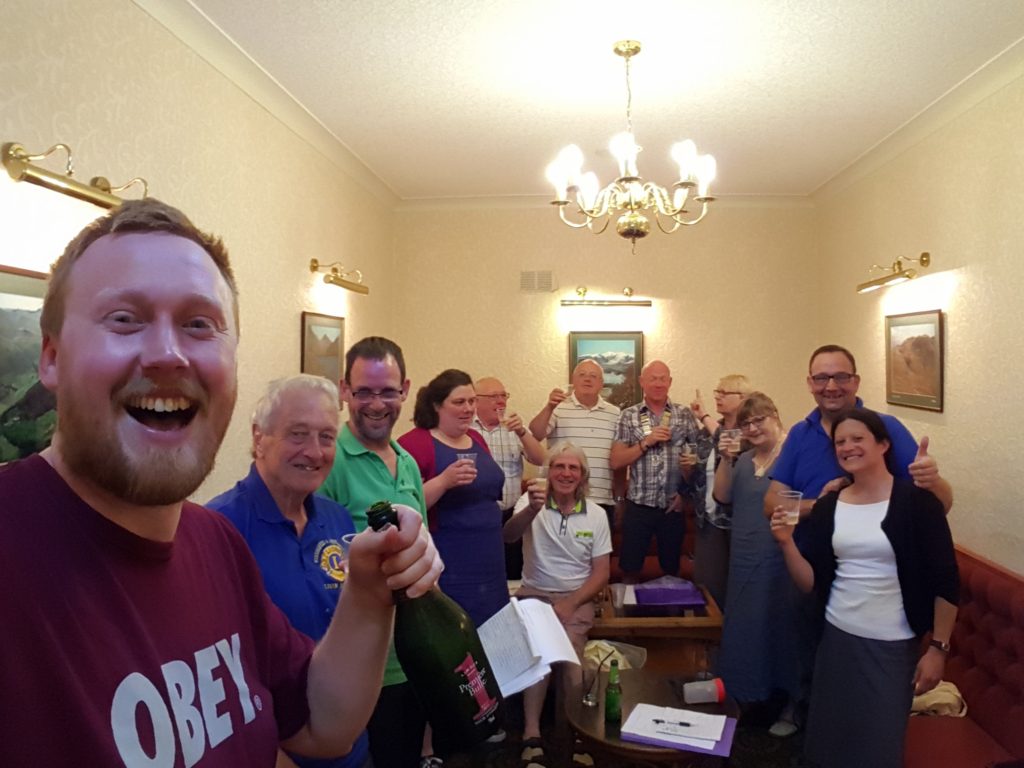 Lion Old Chris gave an update on Steve Bateman and his escapes cycling around the world. He is presently doing a 100 mountain challenge. We will share a link to his blog on his Facebook page when I have a link.

The Handover Lunch will be at Windermere Golf Club. The Menu was under the banner of Mr and Mrs Hicks which confused Old Chris greatly until it was explained that they do the food at the golf club under licence. The price is £15 per person with a great three course menu. It was announced that there was no mushroom in two dishes but there was in another two.

We are back on course for the Charter which will happen at the Langdale Chase hotel on September 25th at 1pm for 1.30pm. Menus will follow but everyone is excited and tickets will cost £24.50pp.

Peter welcomed Laura who is on her second probational meeting ready to be pinned at the next meeting. It was explained that Laura missed the last meeting as she fell over.

In Promotion and Blog I told the club that we were big in Brazil, most people read the blog on a Wednesday at 1pmGMT and people keep searching for Vicky Robinson Bowness and finding our website for unknown reasons.

Keith won the raffle and got a bottle of Perry’s cider. Anthony lost and got angry at Keith.

In any other business

Ben mentioned that he burnt his arm making a pizza. Which doesn’t look so bad now but really hurt 🙁 Everyone laughed at me because it doenst look very bad. 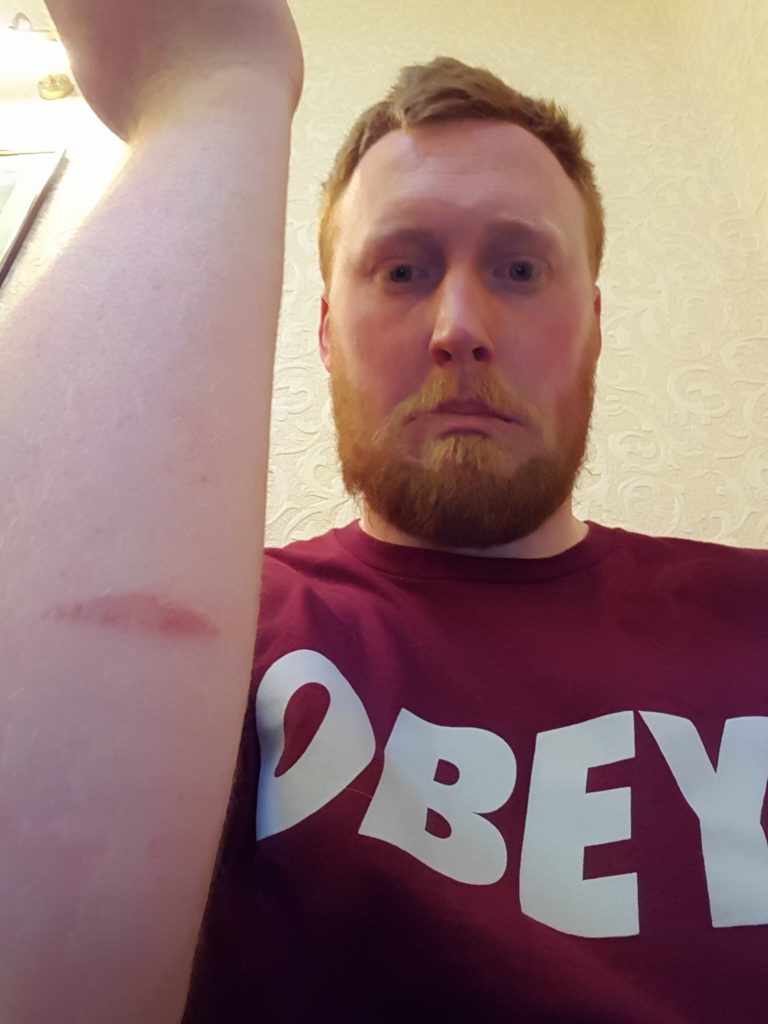 Lion Philip Fell talked about starting a young lions club or Leo’s. This might be in conjunction with Kendal club.

Thea said Richard Brownson said hello, Richard is an old member. Members of the club reminisced about his time in the club. Including the need to get back at the Round Table for a prank they pulled on him several years ago.

Peter told us a story of how Andrew went off when Penny was away with his kids and a friend camping in Allonby. They went for a walk in the morning and went all the way to Maryport which is a very long way and decided to get the bus back. They got the bus back having decided not to walk costing £17.50. Whilst on the bus they didn’t realise for some time that they got the bus to Ellerby Road End, which is nowhere near Allonby. Andrew blamed the nation of Poland. They were saved by a gentleman called Chris.

Elsie asked if she was late or not at the start of the meeting. Andrew apologiesed for Chris when it was actually his fault.