The May meeting started with apologies from Anthony quickly followed by a presentation from Sight Advice South Lakeland. 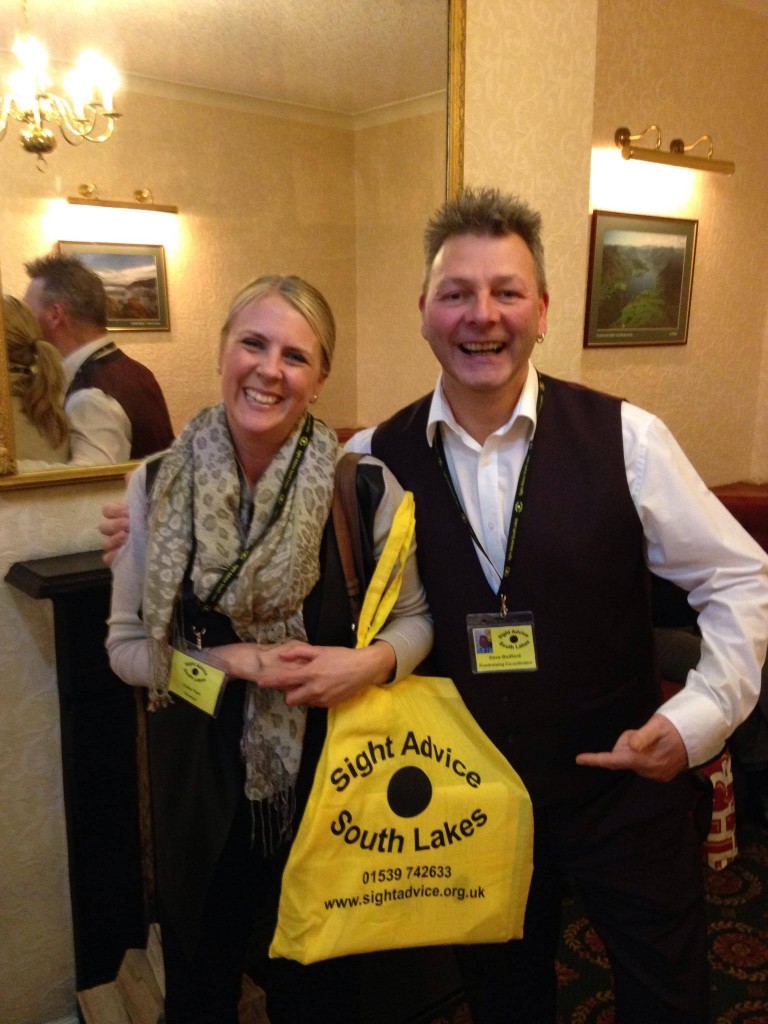 Claire was joined by Dave who both came to the meeting on behalf of Sight Advice South Lakeland. A local and independant charity that raises and spends entirely in the South Lakes. Their aim is to help people with sight problems and raise their standard of life and lobby on their behalf. Last year the charity supported 889 people with an average age of 79. That said they do lots of work with young people and have a dedicated youth sight worker and over 20 young people on the books. The charity do fantastic work including trips, walking groups and sailing. The charity featured on Countryfile when a young member did a big ramble. Visual awareness training is a key part of the Charity’s work going forward and training recently took place for 90 local healthcare professionals. The charity recently moved onto a property on Highgate. The charity have two social enterprise companies including a large print business and a braille translation service.

After Claire’s presentation she opened up for questions and Lion young Chris asked how organisations like Lions can help. Dave said that it wasn’t just money, but more importantly it was volunteering and raising the profile of the organisation. Lion Lisa asked if the Charity had aspirations to join a larger national charity. Claire explained that Sight Advice South Lakeland was focused on our local area.

As an aside Dave came to our first Spirit of Christmas at Low Wood when he used to work for Asda in Kendal and used to be Lion!

The club thanked both Claire and Dave for coming and they left the club after a quick photo by Lion young Chris.

My diet coke tastes funny, but I don’t know if I should go back to the bar or not. It’s a hard one, because if I go I will disrupt the meeting and get a Lion Tamer fine. But if I don’t I might get distracted and type about Diet Coke rather than what is happening at the meeting. I am pretty sure I know what has lead to the strange taste. Basically when I ordered only soda came out of the funnel (I am pretty sure it’s called a funnel, or a fountain? Maybe there is a funnel from the fountain) so the gentleman went and changed the box. So that could be why it tastes funny. But! I just burped and I could taste the Jamaica Ginger Cake that I ate before I came. Could it be the ginger in my mouth that is causing this? Surely ginger wouldn’t do this to a Ginger fellow? I could ask Lion Young Chris to test it for me but again I might get fined, I could argue I’m sharing and that shouldn’t be a finable offence but I don’t think that will wash. I should probably show you a photo of the offending Diet Coke, but I have left my phone on the other side of the room. I’ll try and get it in a minute so I can show you.

Right back to it and Peter is telling us something about a bounced cheque. I am pretty sure I missed correspondence and the Lion share of Treasurer’s report. Sorry about that. A brief discussion ensued on changing bank accounts. The club will be changing from HSBC to the Cumberland. The Cumberland is a great supporter of the club and we have had a few problems with HSBC.

Maggie also raised the Staveley Amatuer operatics society. Eagle eyed readers will remember that the club support taking lots of people to a performance. Maggie and Chris will organise transport for two minibuses a few cars for the “evergreens” group. The club not only provides transport but purchases tickets.

Lion Noel had a cancelled operation which was quite dramatic as he was prepped to go into the theatre but the surgeon didn’t turn up. The club wish him a speedy recovery and have given him a card already!

Chris mentioned he had received an email from former Lion Douglas Dale who was raising money for Diabetes UK, he has raised over £600 by swimming over 22 miles in two months. The club had supported him with a donation for sponsorship.

£246.50 was raised from the Bouncy Castle which was at Brathay. It was a fantastic amount which will go straight into club funds for good causes. It will also be at the Cardboard Boat Race on Saturday 14th May. The Bouncy will also be at the Brathay Marathon on the 22nd May.

I have messaged Chris on Facebook Messenger asking him to try my Diet Coke but he doesn’t have wifi on. I think I will have to go and get something else and take the fine. Here is the coke by the way: 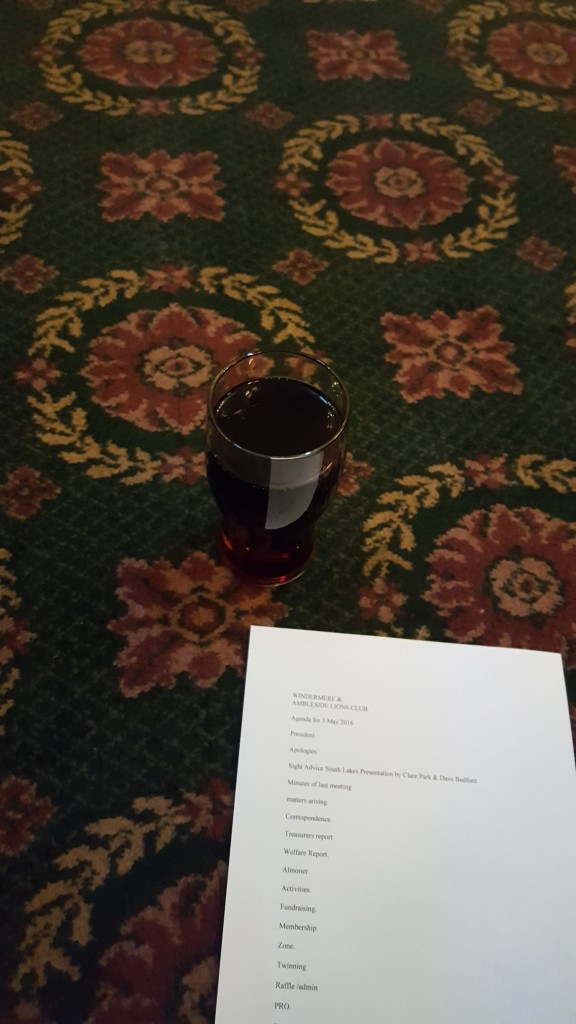 Lion Fell Mk2 told the club about the recent success of the Ambleside Youth Team. They were beaten in the final and impressed everyone there. Philip also told the club about a recent trip to Goodly Dale school where the club funded highviz snapbands for the children.

On fundraising Noel told the club about the Festival. The fair will arrive on 28th 29th July and will operate on the following three weekends up to Sunday 14th August.

CHRIS JUST TESTED THE DIET COKE AND SAID IT WAS JUST FLAT! Im still not convinced its that…

Noel continued that the club would run a pot shy and the Bouncy castle, possibly with the addition of a tug of war or some other activities. St John’s hospice would like to organise a fundraiser with a bungy cannon of some form, which sounds fun.

I just went and swapped my diet coke for one that came out of a bottle rather than the fountain nozzle and it tastes fine! I am sorry to have blamed the Jamaican Ginger Cake. I came back in to the meeting with audible tuts from some members, I’ve got some big fines coming 🙁 . The club were discussing risk assessments for the Bouncy Castle. The club take the safety of the Bouncy Castle very seriously and the risk assessment is updated regularly.

Lisa went and got some crockery for the club. Somehow they came via a vicar, possibly a methodist vicar, and they are now in our shed ready to be used for our pot shy.

We presently have over 100 entries to the car show already and we know there are several more clubs to book meaning it will be a bumper year! Lion Philip Fell has handed out raffle tickets to club members to sell for the Car Show, he will also be setting up a street stall on the weekends. Banners for the car show were also discussed.

In the press officer bit I reported that we had successfully graced the pages of the Westmorland Gazette with our recent twinning. This was well received by members.

Lisa reported on future socials… The next social is on 3rd July at Windermere Golf Club. It might be two courses, or it could be three courses and it might be in a room with a window, or a room with doors. It was explained that the doors can be open or closed which is useful. Somehow the three course meal is the same price as the two course meal. We may be having a mother’s day menu or a bridge menu.

Noel won the raffle receiving a fine bottle of red provided by last months loser, Elsie, and then in a mean twist of fate Elsie lost once again. Some members thought that was mean but Elsie will once again bring a prize.

In Any Other Business Lion Noel had three things:

-On the radio last week it has been 30 years since Chernobyl. Noel told the club how Windermere and Ambleside Lions had hosted children from near Chernobyl on the Glebe.

-Whoops I missed the second one.

-At the meeting with SLDC Noel noticed that the officers had ID cards and we did not but we used to back in the olden days. He thinks we should have them back. Old Lion Chris noted that Noel used to look “dodgy”. Here you can decide: 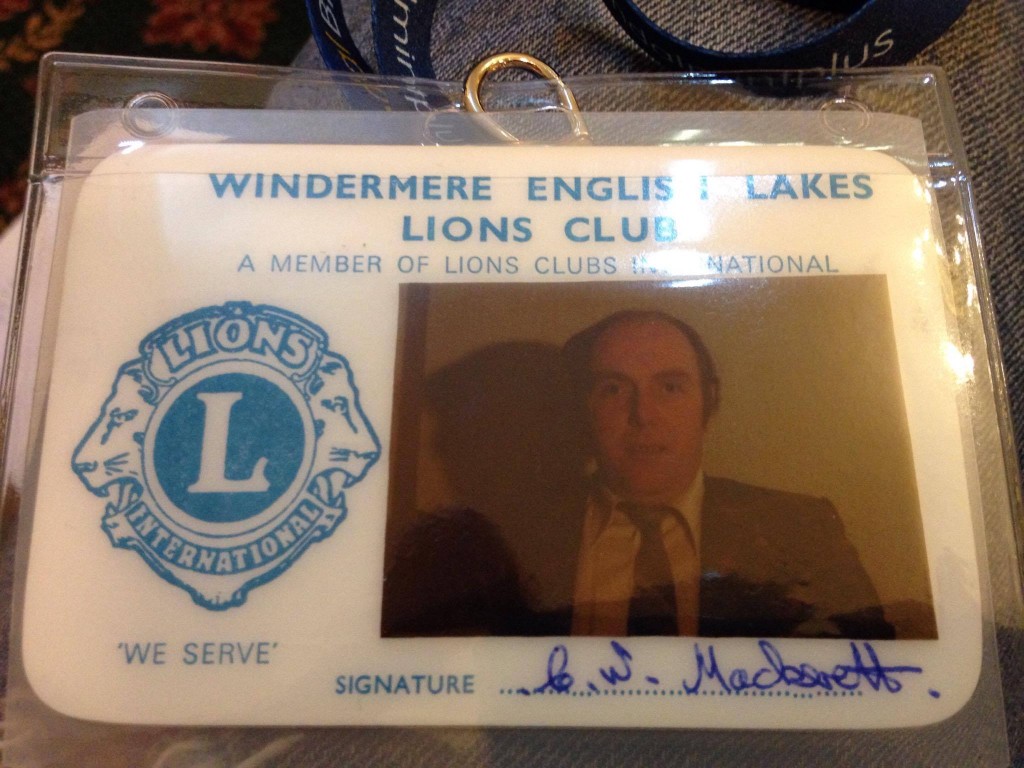 Steve told the club he will be away from the 31st May and he doesn’t know when he will be back, which sounds ominous. He is going to France to cycle 4000km and Limoux is about half way. The club wished him well. He is raising money for Cancer Research UK. Philip proposed we give £100 and I seconded it which was unanimously approved.

Thia raised if we had looked into a coffee morning as it had been mentioned at a previous meeting.

Lisa gave her apologies for May, June, July, August and September. Which is a long time. She is going to the Outer Hebrides, France and Wales, which is a funny way of going about things.

I told the club that I had eaten a Jamaica Ginger cake earlier and I thoroughly recommend them.

Old Lion Chris fined young Lion Chris for bringing his bicycle in the room, Ben for leaving the room, Keith for suggesting we break the law somehow and Philip for calling old Chris “Chris Hamas” on the minutes.

The meeting closed with a toast at 22:12 (I didn’t have any bottle fresh diet coke left).