The Club opened with a welcome to Ivan our District man. Apologies were received for Chris Amos and Elsie. Several members gave apologies for Young Chris.

The minutes of the past meeting were amended by Peter. Something about trailers but I didn’t quite catch it.

Under correspondence we had a letter from Chris Amos, which was strange but nice. He was updating the club on where we can have future meetings. Whilst he hadn’t managed to get in contact with the right person at the Hydro he had contacted Windermere Hotel and found a potential solution with the Windermere Town Council Chamber. A brief discussion ensued about our plaque that we have outside the Hydro and how we should really get a nice new one. It was resolved that Anthony would go to the Hydro to meet with the manager.

We got a nice card from Anny Murphy who thanked the club for the logs that we provided.

The Directors of the club put forward the nominations for our Club Officers going forward. I look forward to updating the Team page when its all official. There wasn’t a nomination for PRO officer, which means I might have sneaked away without an official title.

Our Treasurer gave us an excellent update which included income from the wishing well and car club entries. Outgoings included Bendrigg Trust for a table football table, Flyers for the car show and logs for the free log deliveries.

Young Chris has just entered the meeting. He tried to sneak by but I made loud noises to signify his entrance. I dont have the capability to record a reproduction of the noise and upload it so you will just have to imagine.

The club heard from Anthony about bunting. Anthony told the club that we were still on the search for tape to make bunting. Noel brought a brochure of bunting to show how cheaply new bunting could be purchased. Anthony noted most purchased bunting was plastic and we could make a much nicer bunting. After a few minutes of discussion Keith mentioned that we already have lots of bunting in storage. Members of the club were unhappy with Keith as he could have mentioned this not only a few minutes ago but last meeting. The club will still have a bunting day and Keith and Anthony will have a look at the bunting we didn’t know we had.

Chris Amos gave further information from his peice of paper about his dealing with the Police. He has been contacted by the Commissioner about funding for community projects. The money comes from the proceeds of crime and is sitting for use.

The club briefly discussed fundraising and what events where we would be going to. I hear a few marathons, lots of the Glebe, some Dragon boats and hopefully going back to the Windermere Christmas Market.

Under membership we discussed how we would love some more members of the team. If you are interested please get in touch. A mention was made that Keswick Lions get lots of members because of a beer festival.

The club needs a new raffler and we think Lisa owes a prize. There was a short amount of time looking for a potential prize but one was not immediately available.

We heard a short update about the exciting trip to our friends in Limoux.

Under PRO I told the club about the web stats which were down last month due to no update as I was at home instead of the meeting. Sorry about that. We still had some visitors from around the world though.

Whilst I was giving the PRO report Anthony managed to find a prize. There was questions about whether the item/s in the sparkly bag he had produced would be in date or not. Keith made some raffle tickets. I told the club I thought I had got away with not being the PRO officer but was told that was not an officer position but appointed by the new President and therefore would carry on!

The Presidential Handover will happen on the 2nd July and will probably be somewhere in Ambleside.

A plastic bag was found to use as the raffle picking device. Keith proclaimed that our blind president was the only person he trusted to draw it. President Steve duly pulled his own ticket out and won a prize of mushy peas, green giant sweetcorn and John west tuna chunks in a sparkly bag. 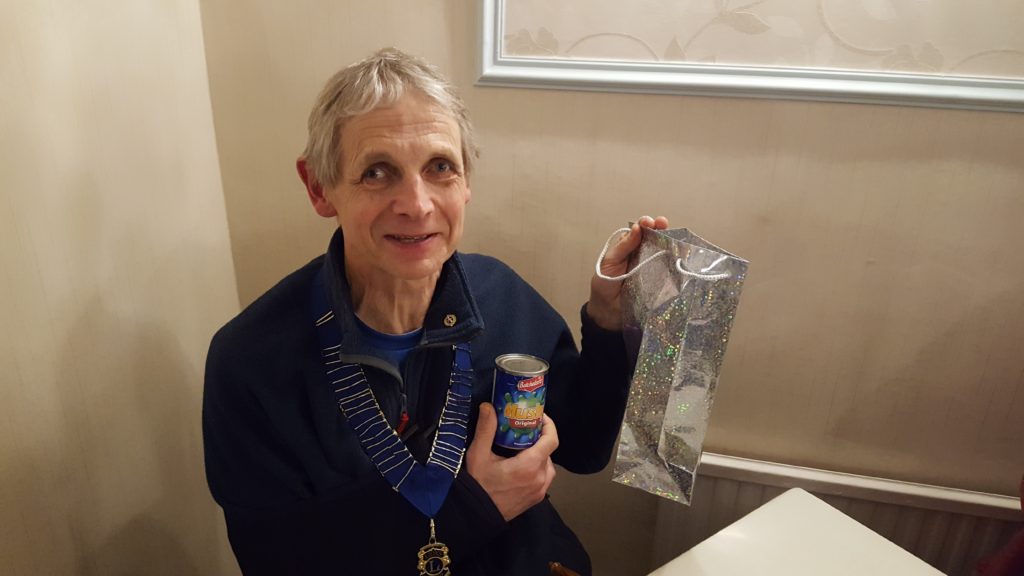 There were fines for Young Chris for being late, Keith for being mean to either the President or the rest of the club when he only trusted Steve with the raffle draw and then fined everyone else for coming to his B and B and having drinks. Noel refused to pay because he hadn’t had a drink. Anthony took all of Steve’s 5p pieces and then fined himself for fining us.