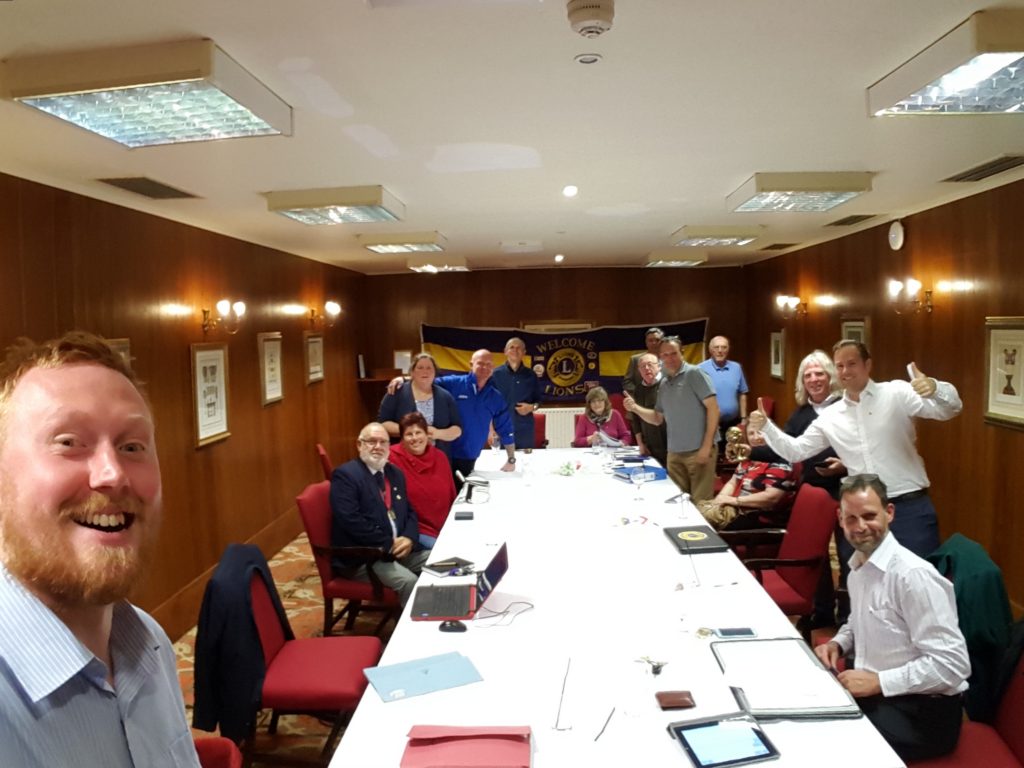 In correspondence we received a few pieces especially two letters. South Lakes carers who were able to visit Brathay. They thanked the club for making this happen. Evergreens thanked members for their trip. Especially to our members who drove.

Leo chief Fell mk2 told us about the wonderful activities that the Leo’s are up to including bag packing for service awards and trips out.

Chris Amos gave an update via Thea about Lancrigg park in Bowness and a £2000 pledge we were giving. I fondly remember Lancrigg as “Lions Park” and as the best playground in Windermere and Bowness.

Noel noted that the Westmorland Gazette were running a campaign called Hospice Angels to fund a St Johns Hospice nurse for 12 months. He proposed that we should give £1000 that was raised from Taylors for having the Fair on the Glebe. It was seconded by Peter although it was noted we don’t actually have a cheque book to use to give it to them. But either way we will pledge it and pay at the earliest point we can.

Andrew Irvine just turned up. Im not sure if our Tailtwister noted it down so he might just get away with it.

Little Chris gave an update on the wonderful Jingle Bell Jog event which will take place on the 4th December at Cockshott Point. Ten entries have already registered. There has already been a Jingle Bell Jog meeting at Low Wood which I missed because of car issues but I still got the lunch bill. Chris noted that he looks forward to me picking up the bill at the next meeting too. Sight Advice South Lakeland are helping and will be running a mulled wine stall.

The Lakes Charity Vehicle Show will be in aid of the Blood Bikes and we are searching for another suitable charity.

Bizarrely one of the lights has started to intermittently buzz loudly just above my head. Im not sure if everyone else has noticed but its distracting me.

A vote has just happened and I’m not sure what it was. I’ve just asked Little Christ and he tells me we have found our other suitable charity for the car show with Langdale and Ambleside Mountain Rescue Team. He whispered so we dont get in trouble.

On the 10th and 11th of December Windermere is having a Christmas Market organised by some Ginger chap. Little Chris has suggested that we have a stall with mulled wine etc. The club is very busy that weekend with a coffee morning and log deliveries but its a good opportunity so Chris asked for us to sign up.

With our District guests, Ivan was able to give us a good Zone update. This including rifle ranges and activities in Newby Bridge. Roy gave us an update about the rezoning and redistricting that we have heard about before. This included talk of snowballs, resolutions, oncomms, pins and Blackpool. The club also received a thank you card from Roy and Liz for the great time they had at the charter.

The club will be at the Remembrance parades on Remembrance Sunday in Ambleside and Windermere and the wreaths have been organised.

The Spirit of Christmas event will be on Thursday 15th December no earlier than 1pm at Low Wood Bay hotel. A brief discussion ensued about chauffeuring and transport for people. It is expected to finish before 5pm. It turns out there is another Fell! With a sweet shop! The club are requesting 110 sweeties and Keith has organised 120. There with be entertainment including Lakes Gospel Choir.

Ambleside Lights will again be assisted by support from Windermere and Ambleside Lions club with marshalling and fencing. The date of the switch on is the 19th November 2016.

Log deliveries were discussed with lists of residents eligible checked. If you know anyone who could benefit please get in touch with the club.

The club will also lend help to the Windermere lights switch on.

There is no prize for the raffle because big Chris isnt here so he will be fined heavily next meeting.

Thea gave an update about our trip to Limoux. There will be a meeting at Chris Amos’ B and B to discuss the event. The proposed date and time didn’t work for anyone at all so another date will be found. The flights and times etc will be given at the meeting.

I gave an update on PRO and told the club the website was doing well with hits from various countries with the Jingle Bell Jog driving interest and traffic. Noel Macakrath told Ben off for speilign his nom rong in the Charter report.

Lion Tamer Fell put the banner up and gave a report about motors and petrols and plugs and oil. We also only have only one bannerette, he suggested we needed some more. Andrew Irvines phone just rang, again I dont think the Tailtwister noted. Keith hasn’t done the stock take.

In any other business

Thea thanked the club for the tombola for a coffee morning and sorted the cork sets into two distinct sets. They raised £300 for Macmillan which is fantastic.

Liz started to speak and Roy groaned loudly to which there were laughs from some and calls for a fine from others. Roy picked up Liz’s purse to get some money out which increased the laughter from some corners. Liz proceeded to tell the club that they need around forty people for the multiple district Convention in Blackpool. Lions are needed specifically for the registration of people. There is a Country and Western Convention in the same hotel at the same time.

Little Chris explained about the new ID badges. A prototype had been produced for Lion Fell mk2 which he modelled for the club. Chris explained that they wouldn’t all feature a photo of Phil with his name and would in fact have our own names and photos on. It was unanimously proposed that we should all get them.

Little Chris, usually called Young Chris Ive just realised also asked about Club places in the London Marathon. He was pointed to a gentleman who can sort it out for him.

Noel thanked the club for nominating him for an MGF award.

I explained that the reason I missed the Jingle Bell Jog meeting was that I was delivering pizza the evening before in my Nissan Micra. The car had already been suffering from two problems that were affecting its usage including only one wiper blade working, the passenger side, and only one headlight being reliable with the other being intermittent because of a melted connector. Anyhow on a pizza delivery to Coniston, in the darkness, both headlights stopped. Headlights are fairly essential to the safe operation of a motor vehicle so I had to find a new car in the morning which took longer than I thought meaning I missed the meeting at midday.

Ivan told the club he had OCD but that it stood for Old Cantankerous and Demented. To which Andrew pointed out that Peter also had that.

Peter brought up the subs again and wanted it minuted. A cheque appeared from one person. I still haven’t paid.

The Tail twister did notice Andrew coming in late, Phil for interrupting, Ben and Chris for having a meeting between themselves (we briefly discussed how this wasnt the case). Then bizarly he suggested that anyone without odd socks should be fined. I offered to swap one of my socks with anyone, but everyone preferred the fine. Little Chris got fined again for having his money still out.

The meeting finished super early at 21.47